Hello Readers! We are excited to announce we have a date for the release of Apollyon’s Gambit!

The fourth book of our series will be released on Sunday, October 23rd, 2016. That day is the anniversary of the Battle of Leyte Gulf, and two days after Trafalgar Day, so we view it as being a auspicious occasion. Apollyon’s Gambit will be available for preorder on Amazon on Labor Day weekend.

Many thanks to each and every one of you who stuck with us and offered your support while we overcame some obstacles to get back on track. We couldn’t have done it without you.

Hello! Today we’d like to introduce you Missy Sheldrake, author of the The Keepers of the Wellsprings Series. She is a gifted fantasy writer who’s work I think will appeal to fans of the genre. Before I turn this blog post over to her, do note that Call of Kythshire is free June 10-12th, and Call of Sunteri is on sale for $0.99 on the same dates. Now, without further ado, here’s Missy!

I’m excited to announce that the third book in the Keepers of the Wellsprings series, Call of Brindelier, is now available on Amazon! If you haven’t read the previous books yet, read on for a super-quick crash course.

When I started writing this series, I really wanted to tell a story that was rich with fantasy, but not overly dark or mired with war and violence. I wanted to show the light side of fantasy: the cheerful, magical, uplifting side which I always drink up whenever it emerges in a story, and which always seems to be so fleeting in fantasy tales. I wanted to tell a story that would capture the hearts of young and old alike. Don’t get me wrong, my books aren’t void of conflict and evil. They tell of uncomfortable moments. There is violence and wickedness, but it’s those moments in my stories which are the fleeting ones. In the pages of my books, you will find fairies, Mages, Paladins, Elves, Dreamwalkers, Princes and Princesses, and even dragons. You’ll travel through a world rich with magic and wonder.

In Call of Kythshire, you’ll learn all about Cerion, a seaside kingdom which has celebrated peace for over a century. You’ll meet His Majesty’s Elite, a guild that is the right hand adventuring team of King Tirnon Plethore, and you’ll join Azi Hammerfel, a young squire who has grown up within the guild’s halls, through disappointments and triumphs. By her side is Rian, her childhood friend, an Apprentice of the Mage Academy. You’ll meet Flit, a fairy from Kythshire, who is as tricky as any fairy you might imagine, but has a depth of character and a sense of purpose uncommon for a typical fairy. You’ll see her world unfold, and feel the evil threat of Sorcery that looms, waiting to destroy it. You’ll learn a little about the Wellsprings, but not too much, for their existence and workings are a well-protected secret. (Click here to read an excerpt from Call of Kythshire.)

In Call of Sunteri, you’ll meet the strong-willed slave boy, Tib, who makes his first appearance as he escapes from the grips of Sorcery in the desert continent of Sunteri. He has help crossing the vast oceans to reach Cerion, but he doesn’t realize it at first. A mysterious being speaks to his mind, controlling his thoughts and making suggestions to ensure his own survival. In the meantime, Azi has been given the task of escorting the Prince of Cerion and his wife-with-child to the lakeside Kordelya Castle as the prince faces suspicion and ridicule after the events of Call of Kythshire. But a darker force emerges from the Dreaming, whose wicked intent is to use any means necessary to escape its prison and claim the magic of the Wellsprings for his own. In this book, you’ll see the devastating effects of the overuse of magic, and what it does to the Wellsprings and the creatures who thrive around them. (Click here to read an excerpt from Call of Sunteri.)

In Call of Brindelier, a dark force looms, more powerful and destructive than any threat Azi and her guild have yet faced. You’ll follow Celli, a scrappy street fighter, as she is enticed into the grips of a powerful Sorcerer. You’ll watch Tib come into his own as he sneaks through the streets of Cerion, uncovering the darkness while also working on a mysterious project. You’ll follow Azi on a quest set by Princess Margary to find proof of Brindelier, a city in the clouds which is the key to all of the Wellsprings in the Known Lands. But Margy is not the only one interested in Brindelier. A dark force has been gathering, poised to claim it for their own. Control over the Wellsprings hangs in the balance. (Click here to read an excerpt from Call of Brindelier.)

Thank you for reading!
Missy Sheldrake 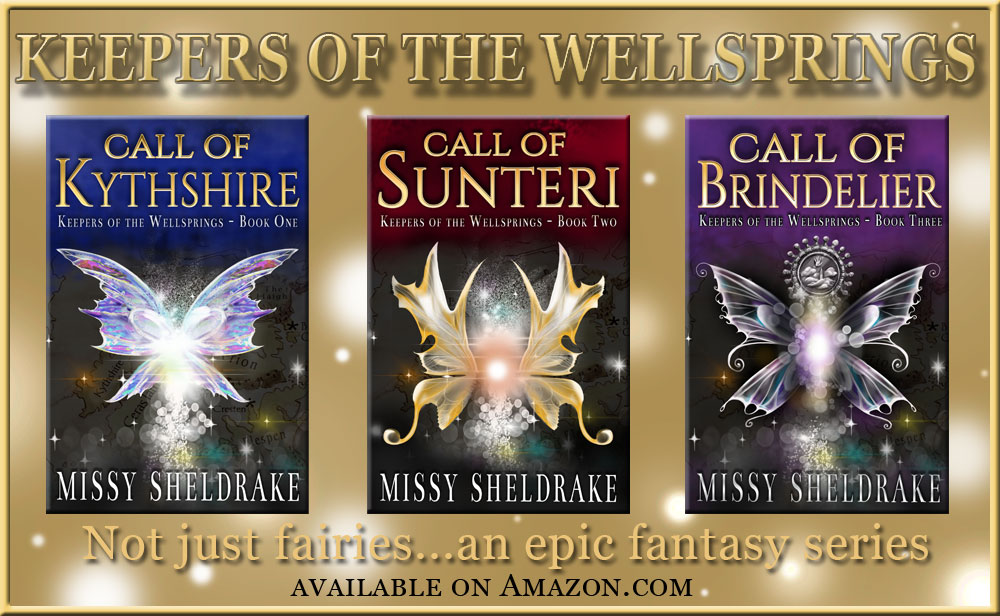 Learn more about Missy through these links: